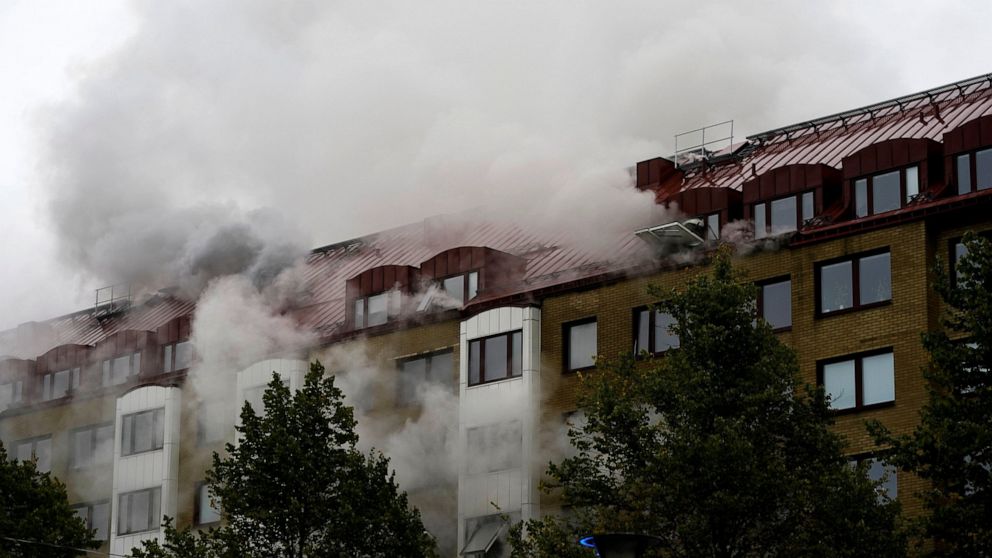 HELSINKI – A powerful explosion rocked a Swedish apartment building early Tuesday in Gothenburg, injuring up to 20 people, setting off multiple fires and forcing the evacuation of hundreds. Police said they suspected the explosion could have been caused by an explosive device.

The explosion took place shortly before 5 a.m. in the Annedal district in central Goteborg, Sweden’s second largest city. The fires spread to several apartments and fire crews were still working to put out the flames by mid-morning.

Jon Pile, director of operations for the Greater Goteborg Rescue Service, said the explosion prompted some people to jump out of windows to escape.

Police spokesman Thomas Fuxborg said the cause of the explosion was not yet known, but he told Swedish broadcaster TV4 that investigators believe foul play may have been implied. They are investigating whether any tenants may have been targeted, he said.

“We suspect that someone may have placed something that exploded,” Fuxborg said.

Sahlgrenska University Hospital spokeswoman Ingrid Frederiksson said 16 people were taken to the main hospital in Gothenburg. Four people – three elderly women and a man in his 50s – were being treated for serious injuries, she said. Some less serious injuries were treated on the spot.

A resident of the building, Lars Hulten, told the Goteborg Tidning daily that the sound of the explosion had woken him up.

“It was probably the loudest thing I heard. The whole apartment was vibrating. The bed vibrated, ”he said.

Hulten said he saw desperate people “hanging from the balconies, climbing over the balconies. There is one that fell. It was very dramatic and a very fast fire and smoke course. “

Another witness, Lars-Gunnar Wolmesjo, told the Expressen newspaper that he too saw people on their balconies and “some came down, others jumped and others had to wait for the fire department to retrieve them with scale”.

Pile told reporters it appeared the explosion took place in the building’s interior courtyard, the front door of which had been blown out.

The explosion comes amid a rise in violence between organized criminal gangs in the Scandinavian nation.

On June 30, a policeman was shot and killed in Goteborg. A 17-year-old suspect has since been arrested. Earlier this year, the Swedish National Council for the Prevention of Crime said Sweden was the only European country where fatal shootings have increased significantly since 2000, mainly due to violent gangs.

In 2019, a powerful explosion ravaged two adjacent apartment buildings in the town of Linkoping, southern Sweden, injuring 25 people and damaging more than 100 apartments. Police believe a feud between opposing criminal gangs was behind the explosion. No arrests were made.

Swedish media immediately focused on Tuesday on the possibility that the Gothenburg explosion could be linked to warring gangs, but Prime Minister Stefan Lofven has repeatedly refused to speculate on a motive.

“We don’t want to speculate on what it is. It is too early to draw any conclusions. We do not know what the motive is. We don’t know anything, ”Lofven said.

“We all want to know more. We want to understand what happened and what was the cause of this explosion, but it is clear that the crime cannot be excluded ”, added the Minister of the Interior Mikael Damberg during the press conference with Lofven .

Yellen warns Congress debt limit must be increased by October 18